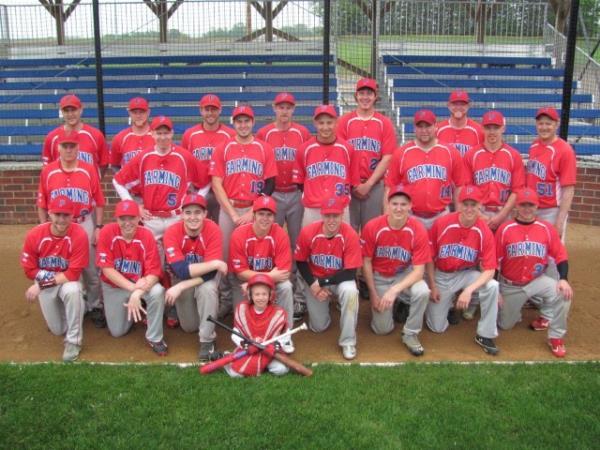 Farming used some aggressive baserunning, timely hitting, and Elrosa miscues to grind out a 9-5 victory over the Saints at Elrosa on Friday night.

The Flames picked up an early run in the top of the first when Mitchell Thelen reached on an error, advanced to third on a single by Aaron Einyck, and scored on a sacrifice fly by Brad Mergen.

Down 3-1, Farming took the lead for good in the top of the fourth as the crew recorded three tallies without the benefit of a base hit.  Chris Wehseler led off the inning with a walk, and advanced to second when Craig Klein reached on an error.  Aaron Nett hit into a fielder's choice, and Chris advanced to third.  Cody Fourre drove in Chris with a groundout to first.  Joel Klein then reached on another error, with Aaron advancing to third.  Joel stole second base, and then went to third as the catcher's throw went into centerfield, scoring Aaron.  Joel Klein then scored on a passed ball.

The Flames put up two more runs in the top of the fifth.  Brad Mergen singled and went to second on a single by Chris Wehseler.  Both runners advanced on a wild pitch, and then scored on a clutch two-out single by Aaron Nett.

In the sixth, the Flames tallied another as Joel Klein singled, went to third on a single by Mitchell Thelen, and scored on an Aaron Einyck groundout.

Farming's last two runs came in the seventh.  Craig Klein and Aaron Nett led off with walks, and advanced on a sacrifice by Cody Fourre.  Both runners scored on a single by Joel Klein.

Brad Mergen pitched the first eight innings for Farming, surrended just five hits.  Brad walked three, struck out seven, and worked quickly and efficiently with the help of an effective curveball.  Brent Mergen relieved in the ninth, and struck out two.

With the win, Farming has won five league games in a row for the first time in recent memory.  The ballclub sits atop the Stearns County League-South Division with a league-leading record of 5-1.

Next up for Farming is a home game with Greenwald on Sunday, May 29th, at 1:30pm.  Greenwald comes into the game winless, which means they are due to play a good ballgame.  Come on out this Memorial Day weekend and cheer on the league-leading Flames!