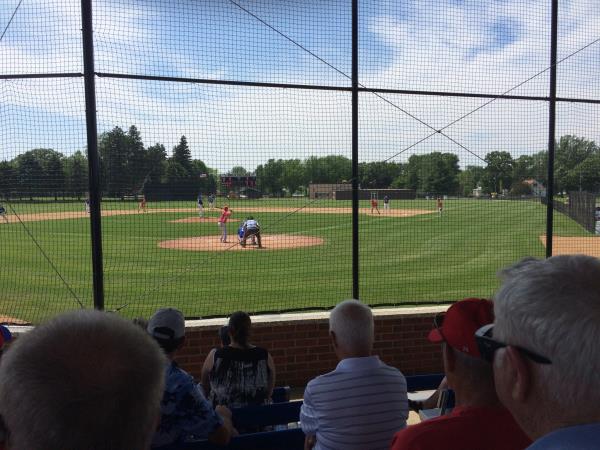 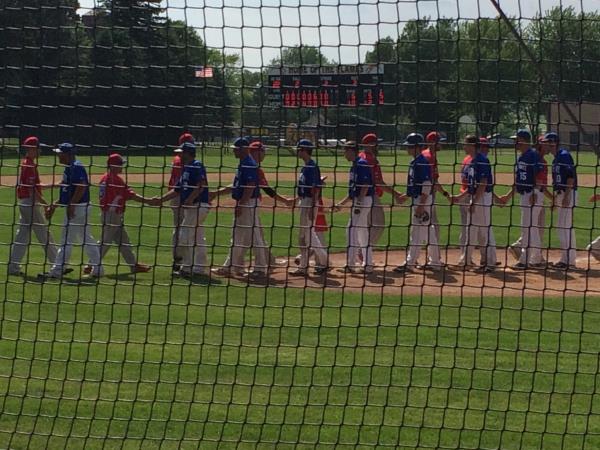 Farming pounded out 12 hits as they defeated the Lake Henry Lakers by a score of 10-6 on a hot and muggy Father's Day, in Farming.

After a rousing rendition of the National Athelm by none other than Public Address Announcer Dan Rea, Lake Henry threatened right away in the top of the first.  But after the first two batters reached on an error and hit batsman, Flames started Brad Mergen proceeded to strike out the next three Lakers.

The Flames put up two runs in the bottom of the second to take an early lead.  Craig Klein had his first of three singles on the afternoon, and stole second.  He went to third on a groundout by Taylor Fourre, and scored when Aaron Nett's grounder was misplayed by the third basemen.  Aaron advanced to third on a single by Dylan Panek, and scored on a double down the right field line by Mitchell Thelen.

Farming put up four more runs in the third inning as 10 men came to the plate.  Nick Mergen reached on an error, and Brad Mergen walked.  Chris Wehseler lined a double to left, scoring Nick and sending Brad to third.  Craig Klein followed with a single, scoring Brad and Chris.  Taylor Fourre reached on a bunt single, and he and Craig advanced on a well executed double steal.  Mitchell Thelen's single drove in Craig with Farming's fourth running of the inning.

The Flames scored another four in the fourth inning to take a commanding 10-0 lead.  With one out, Chris Wehseler reached on an error, and went to third on Craig Klein's single.  After Taylor Fourre walked to load the bases, Chris scored when Aaron Nett drew a walk.  Dylan Panek lined a double to left center, scoring Craig and Taylor.  Aaron then scored on a single by Mitchell Thelen.

The Lakers did their best to make it a ballgame, by putting up six runs in the sixth inning.  However, that's all either team would be able to score the rest of the way, and the Flames held on for a big victory.

Brad Mergen started for the Flames pitching the first five innings, giving up no hits, striking out nine and walking three. Kyle Zierden came on in relief and pitched 3 2/3 innings, getting the save.  Brad improves to 6-1 in the Stearns County League, the best record of any hurler.

For the Flames, Mitchell Thelen led the way going 3-for-5 and three RBI's.  Craig Klein went 3-for-3, with two RBI's and three runs scored.  Chris Wehseler and a double, an RBI, and two runs scored, while Dylan Panek was 2-for-3 with an RBI.

Farming's next league game isn't until July 3, when the league-leading Flames travel to Richmond.