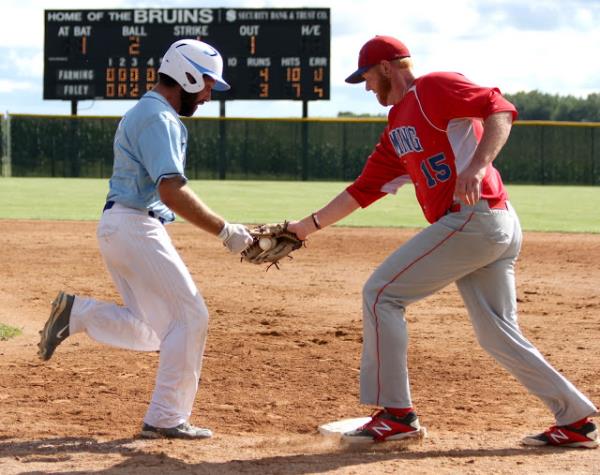 Foley scored three runs in the bottom of the eighth to defeat the Flames 6-4 in the first round of the State Amateur Baseball Tournament.  The game was played before a large a racous crowd in Brownton.

The Lumberjacks put up a two-spot in the third inning, and held it all the way until the seventh.  Joel Klein led off the seventh with a single.  Mitchell Thelen reached on an error by the shortstop, sending Joel to second.  Both runners were sacrificed up one base by Aaron Einyck.  Brad Mergen's single scored Joel with the Flames' first run, and Mitchell scored on another Foley error.

After Foley picked up a run in the bottom of the seventh to lead 3-2, Farming put up two more in the top of the eighth to grad a 4-3 lead.  Aaron Nett was hit by a pitch, and went to second on a single by Taylor Fourre.  Max Carlson's sacrifice advanced both runners up a base.  Aaron scored on a passed ball, and Taylor scored on a single by Mitchell Thelen.

Alas, victory was not meant to be on this afternoon as Foley tallied three in the bottom of the inning.  In addition to three errors committed, Foley threw in a couple of key hits in the inning as well as some heads-up baserunning.

Mitchell went 3-5 with a double and RBI to lead the Flames.  Aaron Nett was 2-2 with a run scored, while Taylor Fourre went 2-4 with a run scored.  Brad Mergen had the other RBI for Farming.