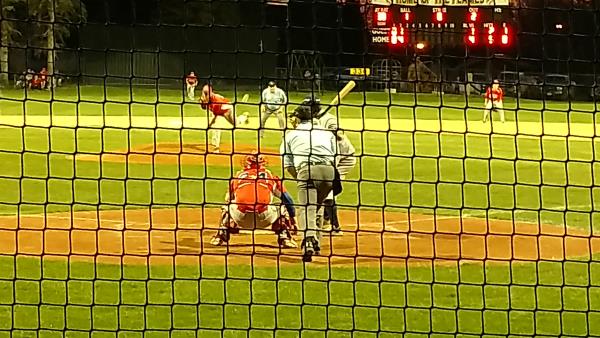 In the first night game ever held at Farming, Richmond scored nine runs in the middle innings to defeat Farming by a score of 11-5.

Farming put up four runs in the second inning after two men were out.  Dylan Panek was hit by a pitch, and John Klein followed with a single.  Mitchell Thelen doubled to right center, scoring Dylan and John.  Nick Mergen singled to left, with Mitchell stopping at third.  Brad Mergen hit a flyball that was muffed by the left fielder (thank you, lights!), with both Nick and Mitchell scoring on the play.

Farming's other run came in the fifith inning.  Craig Klein led off with a single, and Chris Wehseler was hit by a pitch.  Aaron Einyck sacrificed both players up a base, and Craig scored on a sacrifice fly by Aaron Nett.

Randy Rothstein broadcast the game live on KASM 1150 radio, and Tom Elliot from the St. Cloud Times was there as well.  An overflow crowd watched the ballgame, and cars were parked on both sides of County Road 41 for a good distance.

Next up for the Flames is a home exhibition game against the Cold Spring Rockies next Friday evening, May 12.  Gametime is 7:30pm.