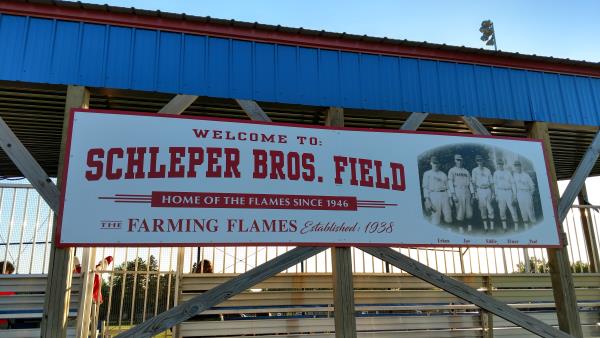 The Flames dropped a tough one on Friday at Schleper Brothers Field, losing to the Cubs 4-3 in 10 innings.

After the spotting Greenwald two runs in the top of the first, Brad Mergen shut the Cubs down for the next eight innings, allowing no runs and striking out a whopping 16 batters in a terrific performance.   Brad had the Cubs off balance all night with a nice mix of fastballs and off-speed stuff.

Farming picked up a run in the first when Mitchell Thelen led off with a single.  He advanced to second on a wild pitch, and went to third when Aaron Einyck reached on an error.  Mitchell then scored on a passed ball.

The Flames tied the game at 2 in the sixth inning.  Taylor Fourre singled, and went to second on a groundout by Craig Klein.  Chris Wehseler was hit by a pitch, and both he and Taylor advanced a base on a wild pitch.  Taylor scored when the Cubs rightfielder dropped a fly ball hit by Kyle Zierden.

After the Cubs scored two in the top of the 10th, the Flames mounted a nice comeback.  Nick Mergen led off with a walk, and advanced to second on a single by Brad Mergen.  Taylor Fourre sacrificed, moving both Nick and Brad up a base.  Craig Klein walked to load the bases, and Nick scored when Chris Wehseler reached on an error by the left fielder.  However, the umpire ruled that the infield fly rule applied, and called Chris out, leaving runners at second and third and the Flames still down a run.  Kyle Zierden followed with a long fly ball that was caught by the left fielder for the final out.

Next up for the Flames is a road game on Sunday at New Munich.  Game time is 1:30pm.