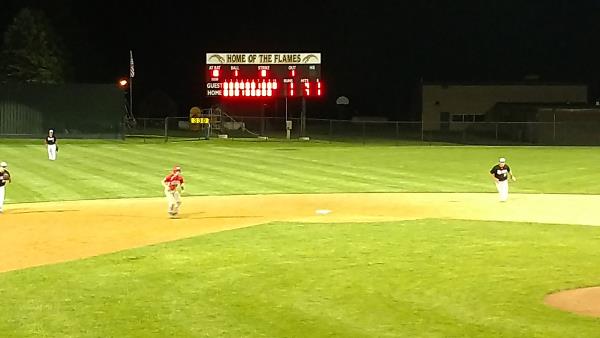 For the second consecutive Friday, the Flames dropped a heartbreaker losing to Roscoe 2-1 in 13 innings.

Farming scored their lone run in the fourth inning.  With one out, Cody Fourre walked.  Kyle Zierden hit into a force play, but went to second when the throw from the shortstop got past the first basement.  Craig Klein's hard-hit single brought home Kyle.  The Flames mustered two more singles in the inning, by Aaron Einyck and John Klein, but Craig was thrown out at home on a good play by the Rangers to end the threat.

The Flames left the bases loaded in the third, tenth, and eleventh innings, and left 15 men on base total for the ballgame.  Farming had nine hits, but struggled to hit with men in scoring position.

Farming is now 1-5 in the Stearns County League South, tied with Roscoe for the fourth and final playoff spot in the division.  Richmond and Lake Henry lead the division with 3-2 records.

Next up for the Flames is a Sunday afternoon tilt at Cold Spring, against the Cold Spring Silver Springers.  Game time is 1:30pm.