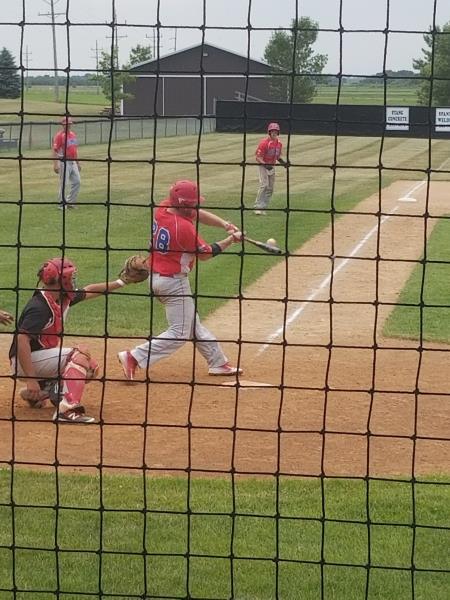 The Flames chances for a playoff spot took a major blow on Sunday, as the ballclub lost a tough extra-inning game at Roscoe.

Farming took an early 1-0 lead on a homerun by Craig Klein.  Craig's shot to left hit the top of foul pole.  In the fifth, the Flames took a 2-1 lead.  Mitchell Thelen walked, and went to second on an error by the pitcher.  Mitchell was sacrifices to third by Nick Mergen.  After a strikeout, Taylor Fourre walked.  Brad Mergen followed with a solid single to right, scoring Mitchell.

The Flames picked up two more in the top of the seventh to grab a 4-1 lead.  After one man was out, Taylor Fourre walked and reached second on a groundout to the second baseman.  Craig Klein walked, and Aaron Nett was hit by pitch to load the bases.  Chris Wehseler followed with a sharp single to right, scoring bouth Taylor and Craig.

However, the Rangers rallied with a walk and three singles to produce three runs of their own in the bottom of the seventh and tie the game at 4.

Both teams had chances to score both in regulation and in the extra innings.  The Flames had two runners in scoring position in both the 8th and 10th innings, but were unable to score.  Aaron Nett hit a long fly ball in the 11th inning that the center field caught right up against the fence.  The Rangers stranded a runner on third in the 10th inning.

Roscoe finally scored in the 12th on a double, a sacrifice, a groundout to short, and a two-out single to right.

Farming is now 1-9 on the season, with three games remaining, while Roscoe improves to 3-9.

Next up, the Flames will host St. Martin on Friday evening, with game time scheduled for 8:00pm.