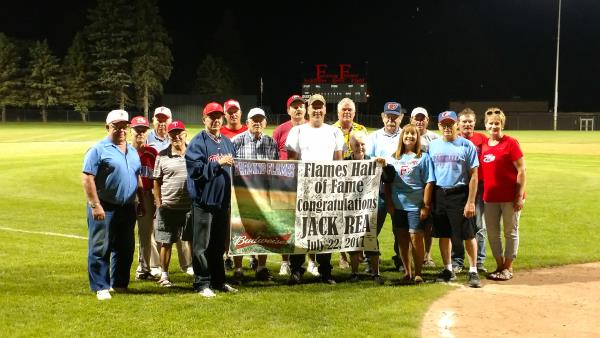 The Lakers jumped to an early lead and made it stick as they defeated the Flames 9-4 on Saturday night.  Prior to the game, long-time volunteer and all-around good guy Jack Rea was inducted into the Farming Baseball Hall of Fame.

Lake Henry put up four runs in the first and another in the second, but Farming battled back.  John Klein led off the third with a single, and Nick Mergen followed with a single of his own.  Craig Klein reached on an infield single, loading the bases.  Brad Mergen walked, scoring John with the Flames first run.  After an infield popup, Kyle Zierden hit a sacrifice fly to center, scoring Nick with Farming's second run.

The Flames scored a run in fifth inning, narrowing Lake Henry's lead to 5-3.  Brad Mergen led off with a long double to right center.  Chris Wehseler grounded out, with Brad advancing to third.  Kyle Zierden grounded out to second, with Brad scoring on the play.  Farming loaded the bases in the sixth inning, but a 6-4-3 double play ended the threat.

The Flames scored their final run in the eighth inning, trimming the Lakers' advantage to 6-4.  Zach Koltes walked, and Carey Shay came in to pitch run.  Carey stole second, and went to third when Nick Mergen reached on an error.  Nick stole second, and Craig Klein walked to load the bases.  Carey scored on a wild pitch.  But Farming was unable to do additional damage, and Lake Henry iced the contest with three runs in the top of the ninth.

Farming finishes the season with a 1-12 record in the Stearns County League South and 3-17 overall, and will miss the playoffs for the first time since 2013.  The Flames lost a number of close games, including a handful that went into extra innings.  A dissapointing season for players and fans, but still an enjoyable summer of townball.

Schleper Brothers Field will be hosting three night ballgames at the upcoming Region 15C baseball tournament.  Check back after next weekend for dates, times, and matchups.