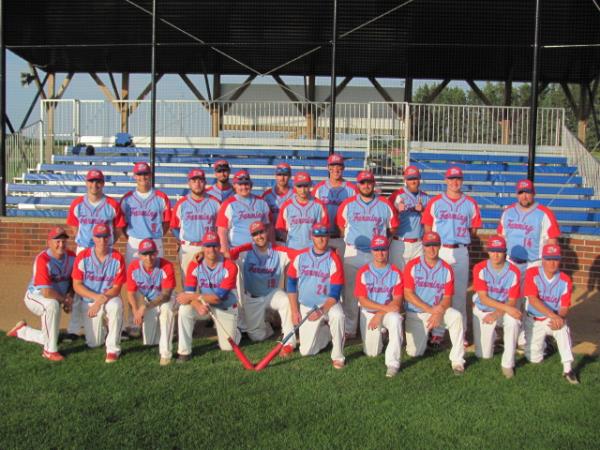 The Flames won a pair of games on Sunday afternoon defeating Greenwald 8-5 and Roscoe 8-0 to claim the final birth in the upcoming Region 15C tournament.  Both games were played at Roscoe.

In game one, the Flames loaded the bases in the first inning but failed to score.  However, Farming batted around as they plated four runs to take a 4-1 lead.  Aaron Einyck led off with a walk, and Mitchell Thelen hit into a 6-4 force play.  Mitchell proceeded to steal second base, and Craig Klein walked.  After Eric Schmitt flew out to left, Taylor Fourre singled to load the bases with two outs.  Tylor Schroeder drilled a two out double into the gap, scoring all three baerunners.  Tylor then scored on a single by Kyle Zierden.

With the score tied at 5 in the bottom of the eighth, the Flames came up with some more clutched hitting to seal the game.  With one out, Dylan Panek reached on an error and then stole second base.  After Taylor Fourre flew out for the second out, Tylor Schroeder walked.  Kyle Zierden singled, scoring Taylor and sending Tylor to third.  Brad Mergen's single scored both Tylor and Kyle giving the Flames an 8-5 lead.

Tylor finished 3-for-4 on the afternoon with a walk, two runs scored and three RBI's.  Kyle Zierden went 3-for-5 with a run scored and two RBI's.  Brad Mergen finished with two RBI's.

In game two, Kyle Zierden threw 8 innings of one-hit baseball to shut down the Rangers.  Farming jumped to an early 1-0 lead on a single by Kyle Zierden, scoring Tylor Schroeder.  The Flames added two in the third on a single by Bard Mergen, and two more in the fourth on a double by Kyle Zierden.  Aaron Einyck and Cody Fourre drove in runs later in the ballgame, and Kyle finished off the scoring with a towering homerun to left center.

Next up for the Flames is the first round of the 15C Tournament.  The boys will face the Elrosa Saints on Saturday, August 4, at 4:00pm.  All of the 15C games will be held at Farming.