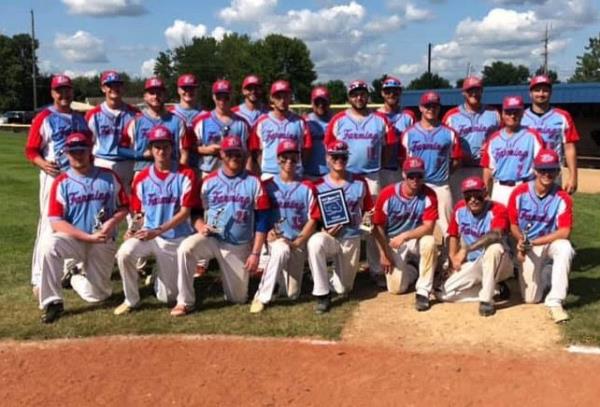 Farming pounded out 12 hits on its way to a 13-3 win over the Greenwald Cubs on Friday night.

The Flames took an early 2-0 lead on an error, scoring Aaron Einyck, and a line shot dinger to right by Ethan Navritol.  In the 3rd, the Flames added to their lead on a run scoring double by Adam Wenkels, and on a series of wild pitches, scoring Adam and Will Mergen.  In the 5th, Cody Fourre and Tylor Schroeder hit consecutve doubles for a run, and an inning later Isaac Nett's double scored Adam and Ethan, who had both reached with singles.

Farming finished off the Cubs with five runs in the botton of the 7th.  Cody reached on an error and scored on another double by Tylor.  Nick Mergen singled and Adam walked, loading the bases.  Aaron singled to left, scoring Tylor.  Will ripped a double down the left field line, scoring Nick and Adam.   Eric Schmitt was intentionally walked to load the bases, and Ethan brought home the game-ending run with a single.

Adam took the bump and went the first four innings giving up a hit and recording five K's.  Tylor came on in the 5th and got the win, giving up a couple earned runs on two hits.

Defensively, the Flames turned a couple of double plays and made some other nice fielding plays throughout the ballgame.  Farming continued their fine defensive play this year, committing just one error.

With the win, Farming moves to 3-0 in the Stearns County League--South.  Next up are two more home games, this coming Thursday vs Spring Hill, and then Friday vs Richmond.