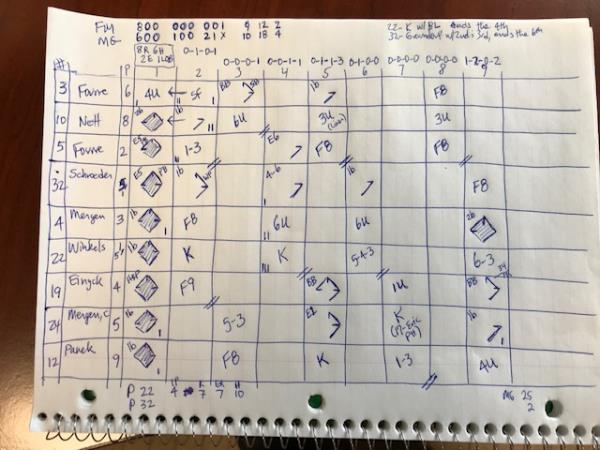 The Grovers scored three runs in the late innings to defeat Farming 10-9 on a hot Sunday afternoon, at Meire Grove.

The first inning was one of the craziest innings observed in recent memory.  After Taylor Fourre led off the game with an out, the next eight Farming batters all reached and scored.  Isaac Nett had a double and a single, and Nick Mergen, Adam Winkels, Chad Mergen, and Dylan Panek all had singles.  Cody Fourre and and Tylor Schroeder reached on errors, and Aaron Eiyck was hit by a pitch.  In all, the Flames batted 12 men in the inning and led 8-0 going to the bottom of the first.  However, Meire Grove scored six runs of their own in the bottom of the inning making the score 8-6 after one.

Farming had a nice opportunity in the fifth.  Aaron led off with a walk, and Chad reached on an error.  After a strikeout, Taylor reached on a single, loading the bases.  Isaac Nett hit a rocket down the first base line which was caught by the first baseman, saving at least a couple of runs.  A flyout ended the inning.

The Flames mounted a last rally in the top of the ninth.  After a flyout, Nick Mergen doubled to left.  Adam grounded out to the shortstop, with Nick taking third.  Aaron walked and Coby Mergen came in to pinch run.  Chad smoked a single to center, scoring Nick and sending Coby to second.  However, the rally ended after a popup.

With the loss, Farming falls to 4-2 on the season, and falls into a tie for second with St. Martin in the SCL-South Division.  Both teams are 1/2 game behind Richmond.

Next up for the Flames are two road games: Saturday at Roscoe, and Sunday at New Munich.  Both games are at 1:30pm.