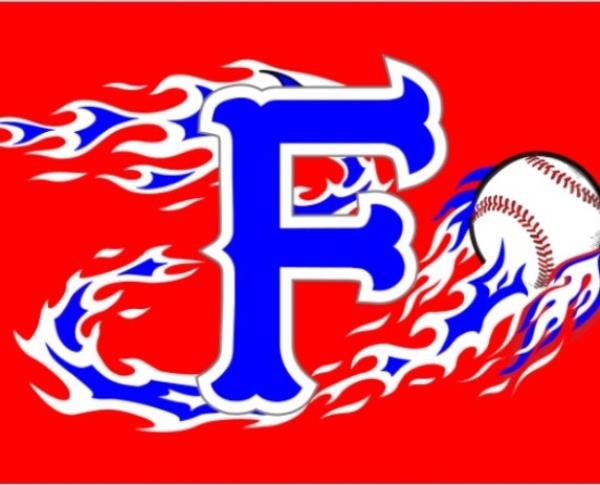 Farming roughed up three Roscoe pitchers on its way to a 12-0 win over the Rangers on Saturday afternoon.

As they've done for most of the season, the Flames got off to a quick start.  Taylor Fourre led of the game with a double and went to third on a long flyout to right by Isaac Nett.  Ethan Navratil's single to right gave Farming an early 1-0 lead.

Farming put up four more runs in the second. Aaron Einck singled to left, and Chad Mergen walked. Will Mergen laid down an excellent sacrifice bunt and reached safely when nobody covered first. Taylor ripped another double scoring Aaron and Chad, and Isaac followed with a single scoring Will and Taylor, putting the Flames up 5-0.
In the fourth, Farming scored two more when Taylor walked, stole second, and scored on Isaac’s towering home run to center.
The Flames finished off the Rangers with a five-run seventh. Tylor Schroeder doubled to right, followed by back-to-back homers from Nick Mergen and Aaron Einyck. Chad walked and Eric Schmitt was hit by a pitch. Hunter Mergen reached on an error, scoring pinch runner Dylan Panek, and Isaac’s long sacrifice fly drove in Eric with the game's final run.
Ethan took the bump and pitched seven excellent innings, surrendering just four hits. Other than a bases-loaded jam in the second inning, Roscoe did not threaten too much during the ballgame.
With the victory, Farming moves to 5-2 in the Stearns County League-South, and are tied for first with Richmond and St. Martin.  The Flames travel to New Munich on Sunday for an important matchup with the Silverstreaks.  Gametime is 1:30pm.