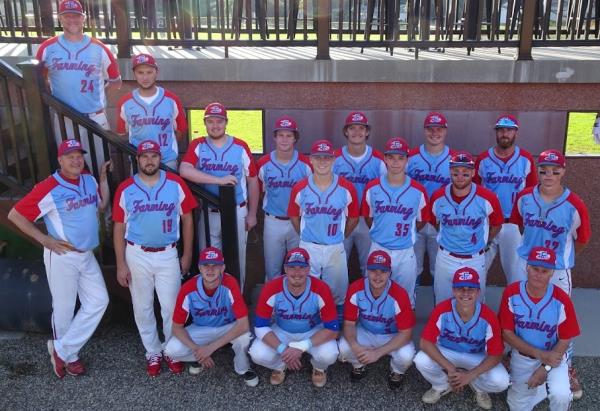 On Friday night, Watkins' Matt Geislinger struck out 17 Farming batters as the Clippers prevailed 2-0.  The Flames managed just five hits, and only once had a runner reach third base.  On the positive side, Tylor Schroeder pitched a fine ballgame, going six innings and allowing just the two runs.  Adam Winkels pitched the final two innings in relief, and got out of a bases-loaded, no outs jam in the seventh.

On Sunday, Farming lost another tough one to Elrosa, this time by a 4-2 score.  Farming left the bases loaded in both the fifth and sixth innings without scoring, and had runners on 1st and 3rd in the seventh before a double play ended the inning.  In the ninth, Cody Fourre narrowly missed a game tying home run.  After catching the ball up against the fence, the outfielder doubled off the Farming runner with a good throw, ending the ballgame.

Next weekend, the Region 15C will continue.  Watkins and Kimball will meet in a seeding game on Friday night.  On Saturday, the remaining four SCL teams will compete for the final two state tournament births.  At 11:00am, St. Martin takes on Elrosa, with Spring Hill and Lake Henry battling at 1:30pm.  In both games, the winner advances to the state tournament, while the loser is done for the season.